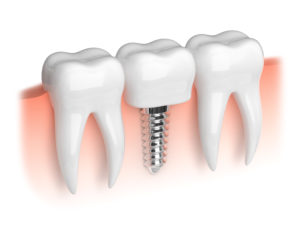 Dental implants are fast becoming the premier solution to missing teeth. According to the American Academy of Implant Dentistry, about 3 million Americans currently have dental implants, and that number is expected to rise by 500,000 next year alone. Of course, no treatment is perfect, as 5-10% of them tend to fail for a number of reasons. However, recent research performed by the University of Plymouth may have discovered a way to make this number much lower. Your dentist in Fayetteville explains this exciting new advancement.

While dental implant failure is rare, it does happen, and it is usually due to mechanical problems, a poor connection to the bone in which they are implanted, infection, or rejection. Most of the time, when failure occurs, the implant needs to be removed.

However, the main reason dental implants fail is actually because of something called peri-implantitis. This is a harmful inflammatory process that affects both the soft and hard tissues that surround the implants. It occurs when too much bacteria and plaque are allowed to accumulate around the implant, which is typically the result of a lack of oral hygiene. This prevents the implant from firmly adhering to the jawbone, which makes it unable to securely support a tooth.

Researchers at the University of Plymouth wanted to solve this problem by coming up with an implant that would prevent the development of peri-implantitis. Initial suggestions involved coating the implants in an antimicrobial agent like chlorhexidine, but this would only work for a short time and has been shown to be harmful to human cells.

So, they created a new approach using a combination of silver, titanium oxide, and hydroxyapatite nanocoatings, which are microscopic coatings painted onto an implant post. This turned out to be very successful, as it was able to inhibit the growth of peri-implantitis causing bacteria by up to 97.5% on the surface of the implants.

Scientists are still refining this method and research is still in the lab stage. They hope to move onto animal models and human volunteers in the near future.

What This Means For You

Should this technology become available to the public, it could usher in a whole new era of implant dentistry. The failure rate would be reduced to nearly zero, making implants a viable treatment option for even more patients. Plus, this would make them much easier to take care of as well, so patients wouldn’t have to worry about their new teeth as much right after they have been placed.

Discoveries like this typically take a very long time to get to patients, so don’t expect to see this in your dentist’s office very soon. However, as soon as it has been approved, you can trust that our practice will be one of the first ones to use it!

Dr. Don M. Chaney is a general, cosmetic, and implant dentist based in Fayetteville, AR. He continually works to stay on top of the latest advancements in dentistry so he can provide his patients with high-quality, fast, and accurate care. To learn more about what you’ve just read and dental implants in general, he can be contacted through his website.

Sorry, the comment form is closed at this time.